Saione is a director and creator of Viva Dance, NZ Salsa Congress and now also NZ Salsa Open. He has been dancing for over 20 years, including Hip Hop, Break Dance, Salsa, Zouk, Bachata and Modern Jive.  He has judged at events like South Island Championships, Ceroc Nationals and NZ Salsa Solos.  He had taught and performed all over NZ and choreographed and taken teams to perform in Australia.

Irina is a creator of the Dance Pro Studios. She began to dance with Rhythmic Gymnastics and Ballet in Moscow at the age of 6.  Since then she has done Salsa, Argentine Tango, Ballroom and Latin, Russian Folk, Gypsy and has explored Modern Dance, Contemporary, Hip Hop, Modern Jive, Burlesque and others.  She has training in Pilates, Zumba and Zumba Toning Courses.  She has studied Anatomy, Physiology, Bio-mechanics, Dance Studies and Choreography at AUT. Irina has performed nationally and internationally, she has choreographed and produced her own dance shows, taught all over New Zealand and has been involved in numerous National events as an organizer (NZ Salsa Championships) and as a judge (South Island Championships, New Zealand Salsa Championships, Kiwi Classic, Le Bop Open Modern Jive Championships and World Dance Games in Taiwan 2013).  Irina and her teams have titles in many competitions of various dance styles. 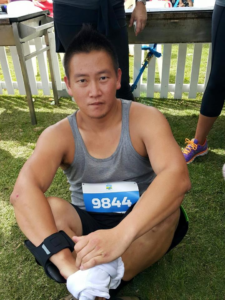 David Yang, 37 works in IT, currently a technical lead at Bartercard. David has created the judging program specifically for our competition. He had attended every single event and is an irreplaceable part of the team.

David is also into cars, skates and has 3 cats, which is currently a compulsory requirement to be on our team.